Coffee plays an integral part in many morning routines around the world. It wakes us up, gives us energy, and warms the soul. But coffee is more than just a morning beverage! It provides people with the opportunity to meet, discuss issues of the day, and to join together.

Coffee has a very long and interesting history. Coffee has been coveted, smuggled, and banned. It has inspired riots and helped create nations. Join us as we travel the world to find out how coffee landed in our kitchens, cafes, and drive-throughs!

This post is part of our Barista Badge. You can learn more about the badge and how you can earn it in the gray box below.

If you are interested in earning the Barista Badge yourself, you can see the Journal Badge Guide, or “recipe” for the badge here. Each Badge Guide contains three steps to be completed in order to earn the badge. These steps can be done on your own, but we encourage you to grab a few friends and learn together!

Step 1 is always focused on research. Look up the topic online, watch videos to learn a skill, or visit your local library.  You can read about the resources and fascinating facts we found below.

The History of Coffee

Before beginning with the history of coffee, I wanted to learn more about how coffee grows. Coffee begins as a fruit grown in warm tropical climates. Coffee beans (the pit of the fruit) grow on a low bushes and come in two varieties: red or green. I was amazed to learn that coffee is the world’s second largest commodity after crude oil!

But how did coffee come to be so popular? Where was coffee discovered? Read on to discover the legend of how humans stumbled upon coffee and how it spread throughout the world.

The Discovery of Coffee: The Legend

Coffee originated in Ethiopia. According to the website HomeGrounds, coffee was discovered by a goat herder named Kaldi in 700 AD. Legend has it that he realized that his goats were acting strangely and dancing about after consuming some red berries. Kaldi took these red berries to a Monk who either delighted or disdained them (depending on who is telling the tale). Soon after, the pit of these berries were ground and boiled to produce coffee!

Brazil is the largest producer of coffee in the world. 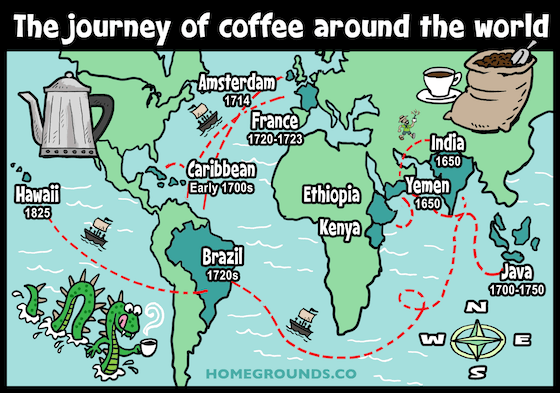 The United States is the leading importer of coffee and buys more coffee than any other county.

As you can see, coffee has a long and interesting history. Coffee culture is alive and well today. Coffee remains popular not just with home brewers but also in retail and specialty coffee shops. Coffee shops are destinations and just like in the 15th century, they are places to learn and grow and have conversations with friends.

Did you know: Decaffeinated coffee is made via a chemical process that removes the caffeine from the bean. Coca-Cola often purchases the caffeine that has been removed.

This Stuff you Missed in History Class podcast titled Coffee: The World’s Drug of Choice is highly entertaining and informative. The podcast discusses the history of coffee and other interesting facts like how the age of enlightenment coincides with coffee replacing beer and wine consumption and how the “coffee break” was invented in the 1950’s.

Check out this History of Coffee in 5 Minutes or Less video on YouTube.

This video discusses the rise of Starbucks.

Join us for part 2 of the Barista Badge as we continue our research about coffee. We will look into coffee tools, terminology and techniques for home brewing!

We want to hear from you! How do you drink your coffee? Where is your favorite coffee shop and what makes it special? Do you know any interesting coffee fun facts? Message us on Instagram or Facebook or drop us a line here.